The newest addition to our family of industrial cutting and engraving laser heads is arguably the most versatile engraving laser on the CNC market. Boasting a real 15 W of optical power as well as a novel design, this compact laser head can process a wide range of wood-based materials, leather, textiles and plastics.

Unrivaled Optical Power in its Class


Each laser module contains four precision-molded lenses, each of which is virtually free of imperfections. Coupled with a vacuum-sputtered multi-layer anti-reflection coating, this design yields superior optical performance and a spectacular power density of 1.5 MW/cm².


Synergy of Power and a Tight Beam Spot


The optical system combines the beams from multiple high-power laser diodes and focuses them to a tight spot. It results in a high power density giving the versatility to engrave diversified materials including stainless steel, tool steel and Titanium.
Lightweight Design Mounts to Nearly any CNC Machine – Featuring a lightweight, Aluminum body that makes the laser weight less than 800 g. As a typical CNC spindle weighs approximately 1.8 kg, CNC machines can operate it effortlessly.


Can be set-up on nearly any CNC machine since it accepts both analog and PWM CNC signals.


With the high-pressure air nozzle you can clean the lens 10x less often. The pressurized air also speeds up the cutting and engraving process by removing smoke and preventing excessive dirt build-up on the lens. In addition, the directed airflow cools down the working site, resulting in a lack of defects and a uniform engraving contrast.


Designed to prevent your laser diodes from dying prematurely, the control electronics are integrated within the laser module. With no redundant wiring, you don’t need to worry about dangerous inductance effects.


Blue laser diodes have longer lifetimes because they don’t suffer from random failure and age more slowly at higher temperatures. The typical lifetime of the laser’s blue laser diodes is equal to 20,000 hours. In contrast, a lifetime of an average glass CO2 tube laser cutter and engraver equals 3,000 hours.

The focused beam spot measures less than 180 µm. This feature enables it to achieve a power density in excess of 1.5 MW/cm² (CW). 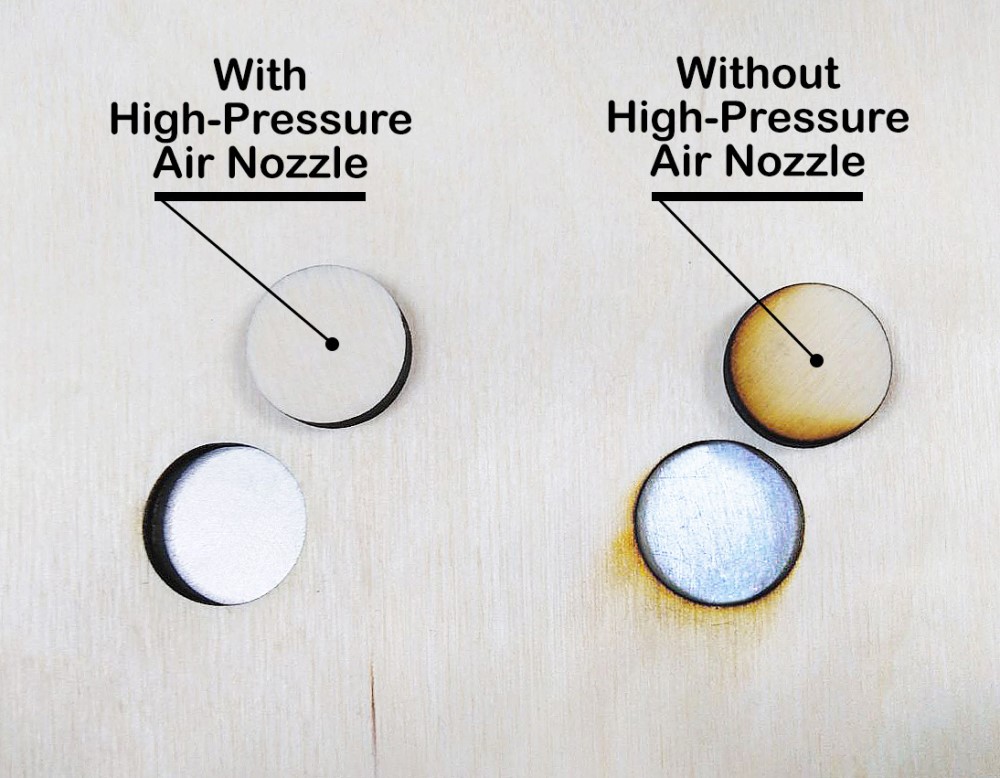 Equipped with a High-Pressure Air Nozzle


The High-Pressure Air Nozzle doubles up as an air cooler for the material being cut or engraved. It minimizes the heat spread from the newly formed edges that could burn the specimen and form undesirable defects. Fresh air also speeds up the laser cutting or engraving process.

Additionally, a common issue encountered during laser engraving or cutting is the generation of smoke particles that form deposits on the face of the laser's optics. The resulting deposition absorbs a portion of the laser beam, causing unnecessary processing power losses. If this process continues for long enough, the accumulated build-up may even permanently damage the optical element it’s been deposited on.

Favorably, the high-pressure air nozzle that the PLH3D-15W Engraving Laser Head is equipped with, provides a reliable solution to this problem. The compressed air flow keeps the fumes away from the lens, significantly decelerating the build-up process. Consequently, our laser module exhibits long-lasting high performance that can substantially outlive products offered by other manufacturers of engraving laser modules.

Within the range of our products, we also specialize in the production of advanced laser diode drivers. With our experience accumulating over the years, we’ve created a novel high-efficiency driver with low power consumption and low waste heat production. Notably, the PLH3D-15W Engraving Laser Head is equipped with the fastest laser head driver on the market, accepting signals with a modulation bandwidth spanning from above 0 kHz up to 30 kHz. Consequently, using a 15 W laser at high speeds is as effective as possible. The laser can be used to engrave elaborate details or to make fine radius turns. As a number of CNC controllers can send modulation signals at high bandwidth, the implementation of a high-speed laser driver within your system is a must.


Key Features of the Laser Driver:


Compatible with a Wide Range of PSUs (Power Supply Units)


the driver is capable of accepting 19-24 V of PSU voltage thanks to the integrated high-efficiency DC-DC converter, which adjusts the input voltage to fit the appropriate diode compliance voltage. This also effectively minimizes the amount of the waste heat generated as well as ensures over-voltage protection.


Able to Operate at High Input Voltage and Power


High-Modulation Bandwidth
ranging from 0 kHz up to 30 kHz;


High Maximum Current Output at 5 A


Integrated within the Laser Module


a compact design coupled with a short linkage between the laser diode and the driver ensures the diode doesn’t die prematurely.